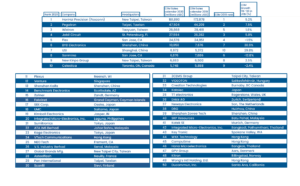 for $384 billion in revenue, an increase of $17 billion from 2019. MMI mainly tabulates its ranking information through an annual survey of over 100 of the largest CEM companies worldwide.

Top 50 sales increased from the previous year by 4.6 per cent, largely because the top ten CEM firms dominated industry growth. This included Foxconn,

Pegatron, Wistron, Jabil, Flex, BYD Electronics, USI, Sanmina, New Kinpo Group and Celestica with growth rates ranging from -22.1 per cent (Asteelflash) to 31.1 per cent (Katek SE). Foxconn alone reportedly achieved revenue growth of 5.2 per cent from 2019 to 2020 and accounted for over half the Top Ten revenue. All MMI international currency conversions are based on average annual conversion rates established by the US Federal Reserve.

Overall, the APAC region accounted for around 81.9 per cent of the Top 50 CEM revenue, with the Americas representing 16.2 per cent and EMEA 1.9 per cent. The APAC region achieved the highest growth of 6.0 per cent, while the Americas saw a -0.2 per cent decline and EMEA experienced -3.4 per cent negative growth. This illustrates that the APAC region has been the main beneficiary of communications and computer replacement/upgrades that took place in 2020. The medical equipment market expanded strongly for all three regions, as did EV automotive.

In addition to ranking providers by 2020 sales, the MMI Top 50 listing includes sales growth, previous rank, number of employees, number of plants, facility space, space in low-cost regions, number of SMT lines and customer data. This special data was published in the March 2020 edition of MMI and in April included market segmentation data obtained from the MMI survey