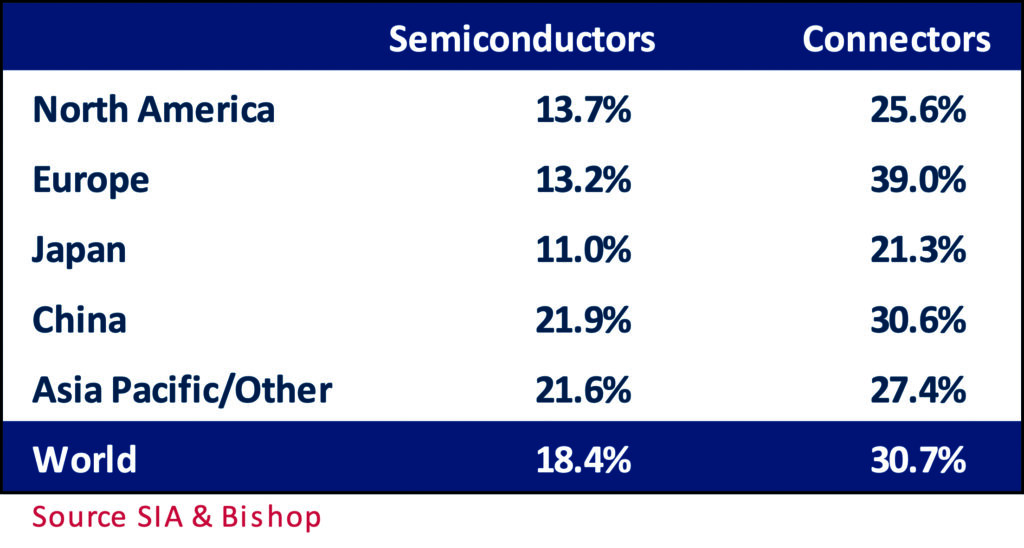 The Semiconductor Industry Association (SIA) reported May sales of $43.6 billion, up 24.7 percent from the prior year, and up 4.2 percent sequentially.

Connector industry sales in May were up 30.7 percent from the prior year and increased 7.3 percent sequentially.

Connector industry sales performance has been higher than semis for the last seven months. Sales performance for semis did not decline in early 2020 as connector sales did. The converging sales performance, however, makes more sense for the two components which are largely used in tandem.

The following table displays year-to-date performance, measured in US dollars, by geographic region for both components:

Many countries have started to revive their economies, but some have also seen setbacks. We do not anticipate that there will have been significant setbacks in connector industry performance in the first half of 2021.

However, the surge in Covid-19 cases in recent months has picked up in some countries such as India and Brazil. An increase in industrial production around the world has resulted in spiking demand for semiconductors and other materials, with many shortages showing up from January through May. New outbreaks in Taiwan and Indonesia could further exacerbate the semi shortages.