Chip sales declined in the first half, but demand bounced back in the third and fourth quarters and distributors expect to post modest semiconductor sales growth for the year.

When the coronavirus pandemic spread across the world, most distributors thought that their semiconductor sales would fall this year because the pandemic shut down production of electronics equipment and components.

However, the severity of impact on distributors’ semiconductor business was somewhat muted as demand for chips from a range of industries increased in the second half. Many distributors now expect a modest low single-digit increase in semiconductor revenue for the year, while some expected double-digit revenue rises.

“It’s very interesting,” said Greg Peloquin, executive vice president of power and microwave technologies for Richardson Electronics based in LaFox, Ill. “Our business is up over double digits with a book-to- bill of 1.21. It’s is shaping up to be an amazing year.”

He said much of semiconductor demand during the pandemic has been by the rollout of 5G networks. “5G is just booming right now. The bookings are through the roof. The sales are through the roof and customer count is increasing,” said Peloquin. Richardson is a niche semiconductor distributor that carries RF and wireless and power management ICs. The largest part of Richardson’s RF and wireless business is communications infrastructure.

Peloquin said the pandemic has expedited rollout of 5G networks and help drive demand for RF and wireless chips sold by Richardson. The pandemic resulted in lockdowns in various parts of the world, resulting in many employees working at home. Demand for Internet bandwidth increased which helped to boost rollout of 5G network infrastructure, he said.

Demand changes
Peloquin said Richardson saw demand slow down in March and April as manufacturers halted or eased back on production initially and lead times started to stretch. “But all that changed in the last few months,” he said.

Besides the rollout of 5G infrastructure, semiconductor fab equipment manufacturing is also helping drive Richardson’s sales, said Peloquin. Chip companies are building new 300mm fabs and investing in new semiconductor manufacturing equipment for those. Trade association SEMI says that 300 mm Fab investments in 2020 will grow by 13 per cent and another 4 per cent in 2021. 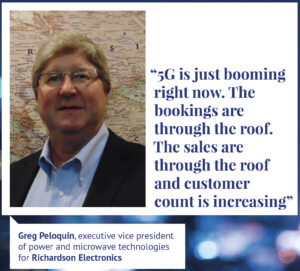 Also driving semiconductor demand for Richardson is alternative energy including wind and solar applications. Richardson supplies power management chips to that segment. “We have a number of products like ultracapacitors that are replacing batteries in wind turbines,” said Peloquin.

He added that Richardson’s business had been growing before the end and will grow after as well. One reason is that chipmakers are sending more customers to their distributors. “The distribution model over the years has been able to put together a very efficient model to support” customers and semiconductor manufacturers, he said.

Richardson also has a design center and a manufacturing center which can design and build boards for customers. It also has complete die and handling capability. “A lot of customers just want to buy the die or certain amount of the die and build their own boards. So, we have the ability to sell them the finished product from the supplier or buy the die and sort and test it,” he said.

Avnet said its “core electronic components” revenue, which includes semiconductors, increased sequentially and year-over-year in its last fiscal quarter which ended Sept. 30. It posted growth in 5G related products and products for automotive applications, he said.

While there has been an increase in design activity, there is uncertainty in the market and concern about what the impact will be of the second wave of COVID-19. “Our customers are focused on ensuring continuity of supply and, especially in times like these, we act as an extension of our customers’ business to ensure they have a healthy supply chain. We’ve sharpened our focus on our primary components’ distribution operations,” he said.

There is also concern about the lead times for some components, said Roybal. Lead times are kind of a “mixed bag right now. We’re seeing an increase in for certain components,” he said. High-end microcontrollers “seem to be the one that’s going out the most as they’re tied to 5G. The rest of them might be going out two to four weeks, something in that range. We’re watching them closely,” said Roybal. 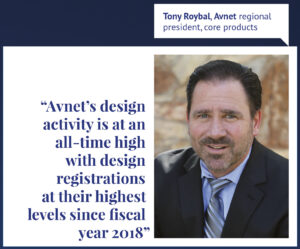 Some distributors say the pandemic impacted their semiconductor business in different ways at different times. In the first and second quarters there were “supply chain constraint situations” that occurred which impeded sales, said David Stein, vice president, global supply management for Digi-Key. Early in the year there were problems with semiconductor supply because of factories being shut down due to COVID-19. “We had constrained semiconductor production in Q1 and Q2, but that got back to normal in June/July,” said Stein.

Global demand returns
He said the last two quarters have been very strong with “activity coming back globally in all parts of the world.” Digi-Key’s semiconductor sales should have “small single-digit growth although unit shipments will be up close to 10 per cent,” said Stein.

Some industries and segments have had greater demand for semiconductors than others this year. Demand has been stronger from critical markets that “support communications infrastructure, medical products, work-from-home stations, industrial complications and handheld devices,” said Stein.

“We’ve also started to see automotive resurface again, after it was shut down for the first part of the year,” he said. Semiconductor demand from automotive “may not be as strong as past years, but it has a good uplift. And within automotive, vehicle electrification is on the rise in a big way,” he said.

Demand for wireless chips, microcontrollers, and sensor-type products that have been used to support many medical applications have been in high demand, he said.

With commodity semiconductor unit sales growth is stronger than revenue growth “there has been some pressure on the average selling price of certain types of products,” said Stein. But there have been “pricing changes both upwards and downwards, so depending on the type of products. We’ve seen both types of changes,” he said.

Recently there also have been some “lead times push out again with sensors, microcontrollers, MOSFETs,” he said. Digi-Key is growing its inventory levels. “We have a focus to grow our inventory throughout the end of this year so that we start 2021 with a healthy foundation that is able to support some of the designs we focused on last year as well as to support the engineering community forward in 2021,” he said.

Richardson is also building its semiconductor stockpiles. “Our backlogs are increasing so our inventories are increasing,” said Peloquin. “ Forecasting is very hard. We’ve increased inventory because we think 2021 is going to be a banner year for our market and our business,” he said.