Long lead times, transportation delays, and finding new customers are some of the issues that small, specialized distributors face.

Last year was a challenging time for most distributors, including small, specialized distributors which have smaller line cards and fewer customers and resources than larger broad line distributors.

But such distributors have risen to the challenge and have managed to be competitive and in some cases grow sales despite the impact the coronavirus pandemic has had on the overall electronics supply chain.

With fewer customers and limited line cards, it would seem that specialized distributors would be more at risk when component production slows down or shuts down and lead times stretch. However, if the distributor services customer segments that are considered essential or produce products that are not impacted by the pandemic, then the smaller specialized distributor can thrive or at least post positive sales growth.

That may be the case with Integra Electronics, a small distributor that sells capacitors, connectors, diodes, and other passives and discrete semiconductors. Last year. the Fullerton, Calif-based company grew its sales 30 per cent.

“The volume of capacitors that we sold to contract manufacturers in 2020 compared to 2019 have been through the roof,” said Baker.

He said sales of RVs have boomed during the pandemic and the trend had a trickle-down effect resulting in more demand for carbon monoxide detectors as well. “If we weren’t involved in marine and RV, I would say we probably would have had a bad year. But we ended up with one of the best years we’ve ever had,” said Baker.

He said while Integra’s sales increased, its business operations were impacted. Many office employees had to work at home and warehouse workers were spaced apart and everyone had to wear masks. 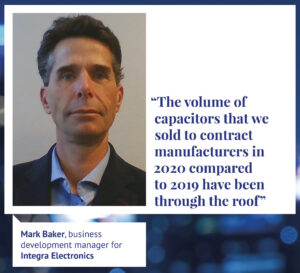 Dealing with lead times
One of the biggest challenges for Integra was dealing with stretching lead times for passives, diodes, electromechanical parts and plastics. “We really had to spend a lot of time with our suppliers, managing the forecasts and customer requirements, “ he said. Lead times for capacitors stretched about 18 weeks. In some cases, Integra was able to substitute parts from other component manufacturers that were not originally specified by the customer.

“We utilized some of our other suppliers that had inventory for parts” that were similar to the parts specified by customers “so customers could maintain their production levels,” said Baker. “It worked out.”

Since the first of the year business has continued to be strong, according to Baker. The bad news is lead times for many components “are still being pushed out” because of strong demand. Business should remain strong through at least the first half of the year, according to Baker. “The third quarter may be a little softer” and business could become sluggish in the fourth quarter, he said.

To help boost sales in the second half of the year and in the future, Integra is expanding its online presence. “We are increasing our product offerings online that suit the type of online customer that we can sell to,” said Baker.

“We are looking for suppliers that offer inventory sharing so we don’t have to carry a lot of it,” said Baker. That would give Integra exposure to component manufacturers’ inventory at their warehouse and then “we could drop ship from the manufacturer to the customer,” he said.

Another smaller, specialized distributor that has posted healthy sales growth last year was Steven Engineering, based in South San Francisco. The distributor had “high single-digit growth,” in 2020, according to John Braasch, director of sales and business development for the distributor. Steven supplies components for automation control.

“All in all, we’ve done fairly well considering the challenges and the uncertainty that we faced last year,” he said. Steven did not meet its sales goal for the year “but we came close. We had fairly lofty goals last year. We had high single-digit growth so we ended up having a fairly successful year,” said Braasch.

Dealing with shutdowns
Part of the problem during the pandemic was it was hard to get components, especially early in the year, he said. “It depended on the manufacturer and timing.” Distributors that bought parts made in Asia “got impacted quicker” during the pandemic. Production shutdowns in Asia occurred in March and April and “we saw longer lead times,” he said. After that, production in Europe and North America was impacted and lead times stretched for more components.

Braasch said a lot of the problems with supply and lead times was due to transportation issues. He noted that airlines had fewer flights so more parts had to be transported via ships, which contributed to longer lead times. It is “surprising so many electronic components are transported by airlines and not just UPS,” he said.

Braasch said business has remained healthy for the first month of the new year. “We had a fairly strong January. It is in line with what we’ve seen over the last six months,” said Braasch. He said Steven’s sales should grow again in the high single-digit range and double digit-growth is as possible in 2021.

Sales growth will be impacted by the overall growth in the economy, but the pandemic has made it more challenging to grow sales. “Sales is a challenge in normal years,” but COVID-19 has changed the way Steven has to do business with customers, said Braasch. “We don’t have as many face-to-face interactions as we normally would,” he said.

Such meetings are important because they result in close relationships with customers, which is “key to growing sales,” according to Braasch. “Our team had to learn new methods or ways” interacting with existing customers and connecting with new customers. “Our field sales team almost became inside salespeople overnight, having to do everything on the phone and computer and Internet,” said Braasch. “We used to show products face-to-face and discuss those products with customers. Now we have to do that virtually. So, they have had to learn new methods,” he said. 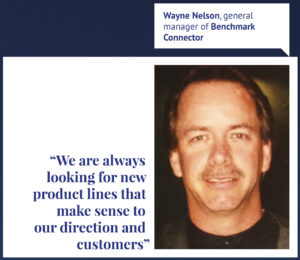 Enhancing value for customers
He said key to Steven’s growth will be enhancing the value it brings to existing customers. At the same time Steven will be looking to expand markets with the product line cards it carries. “We don’t add a lot of lines each year. We try to have a fairly controlled line card,” said Braasch.

He said value-added services can help Stephen grow its business. Some of those capabilities are mechanical assembly, such as mounting components on a DIN rail or “adding all the labeling that they need for their end product or putting the part in a kit.”

Some distributors that service niche markets had a challenging year. Wayne Nelson, general manager at Benchmark Connector Corp., based in Sunrise, Fla., said business was sluggish in 2020. Benchmark sells connectors to the mil-aerospace industry. “2020 started out very strong, then in May the COVID scare pushed sales down a bit for a few months, but by August sales were picking up again,” said Wayne. Unfortunately, Benchmark “never regained the momentum of the first quarter of 2020,” he said. Sales in January (2021) have been sluggish.  “Overall, we believe sales in 2021 will be much like last year,” said Nelson.

Nelson said Benchmark will expand its customer base while increasing its footprint within existing customers. It plans to add more product lines over the next several years. “We are always looking for new product lines that make sense to our direction and customers,” he said. He added sometimes “while you’re growing your relationship and product offerings with your current customers you find a link to a new prospect,” he said.