Expect a seller’s market for power management integrated circuits for the rest of the year because of strong demand and limited production capacity.

A double-digit increase in unit demand, tight supply and higher prices will result in the worldwide power management integrated circuit (PMIC) growing 19 per cent this year.

The researcher noted that despite the pandemic that shut down or slowed production of a lot of electronics equipment for weeks in the first half of last year, the PMIC market still grew four per cent as unit demand and prices increased about two percent as equipment and component demand bounced back in the second half of 2021.

The projected increase in revenue and demand for PMICs is coming from a wide range of customer segments including the automotive industry, computers, 5G handsets and infrastructure, among others.

“Power management ICs are critical components in just about every system,” and demand for vehicles, computers, 5G phones and other equipment is rising, said Brian Matas, vice president, market research for IC insights. With increased demand and limited production capacity, there are shortages of PMICs and prices are increasing.

In fact, shortages started to occur in the second half of last year when demand for PMICs increased when the auto industry rebounded in the third quarter after suffering a downturn in the first and second quarters. When the auto industry recovered “other end-use segments were going strong such as computers, 5G cell phones and video game consoles,” said Matas. There was not enough capacity to meet all the demand resulting in serious shortages for PMICs and other parts.

The bad news for chip buyers is shortages continued in the first quarter of 2021 as many semiconductor manufacturers, including foundries, are running at full capacity or near capacity, said Matas. 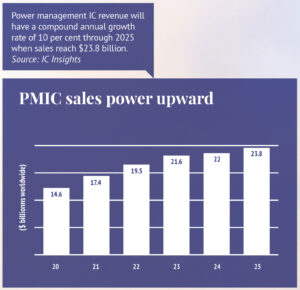 Low inventories for automotive
While shortages are affecting all industries, the auto industry’s shortages problem is exacerbated because automakers and their key systems suppliers do not keep large inventories because of the just-in-time system they use, said Paul Pickering, senior analyst, power semiconductors for researcher Omdia.

“The auto industry likes to minimize inventories. When the inventory gets depleted, if they don’t have the next batch coming in within a couple of days then there’s a problem,” said Pickering.

Adding to the problem is the qualification requirements for power management ICs and other semiconductors “are much more rigorous than commercial industries so a similar chip used in other industries cannot be used for automotive systems,” said Pickering. Automakers and their systems manufacturers that supply them “don’t have the flexibility in the supply chain to find other sources of supply” quickly because new suppliers and their parts need to be qualified to automotive standards, he said.

Automakers require high volumes of parts and semiconductor fabs have automotive demand “built into their manufacturing schedules,” Pickering said. But when automakers cut forecasts because of declining demand, semiconductor companies will reallocate chip manufacturing capacity to other customers in other industries which is what happened last year. Automakers initially had a sharp decline in vehicle demand that shut down production at many plants. Semiconductor capacity that was targeted for automotive was re-allocated to other industries. However, later in the year vehicle demand increased and there was not enough production for PMICs and other semiconductors needed by automakers and their system suppliers.

Strong demand, limited supply
The bad news for PMIC buyers in the auto industry as well as other industries is PMIC and overall semiconductor supply will likely remain tight through 2021 because capacity will remain mostly limited and demand for PMICs will continue to grow especially from wireless communications, industrial and automotive.

“All together those segments make up about 70 per cent of the power IC market,” said Pickering. He said with each segment there are different demand drivers. In wireless communications “obviously the big story is 5G. We are just starting to see 5G handsets,” said Pickering. Five-G handsets have more power ICs than earlier generations of cell phones.

“The other side of it is the rollout of 5G infrastructure,” which will also need PMICs, said Pickering. Five-G phones operate at higher frequencies than 4G phones. Millimeter wave frequencies used in 5G “don’t go through walls very well,” he said. Cell phone carriers will have to install any micro-base stations for 5G, said Pickering.

“Some people said every street in every city will have multiple cell phone micro towers and they will all need power management ICs. That will be a huge growth,” said Pickering. 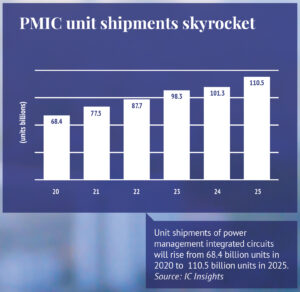 EVs will boost PMIC usage
The electric vehicle subsegment also will drive PMIC sales next year and beyond. EVs use 2 to 3 times as many semiconductors as an internal combustion engine car, said Matas.

“Electric vehicles are clearly heavy users of power semiconductor devices,” said Pickering. Lithium electronic vehicle batteries “require careful management of the controller,” he said. “Lithium batteries are very sensitive to slight changes in their operating temperature,” he said. If they are charged too quickly or they are discharged too quickly, operating life declines, said Pickering. If the temperature is outside a certain range, operating life also declines.

“What that means is you have to continuously monitor the battery to make sure you’re always in the sweet spot — the safe operating area of the battery,” he said. Power management ICs are needed for that.

Power ICs are also needed for the traction motor itself which uses a lot of power, said Pickering. “That has spawned increases in the drive circuitry for the motors and the controllers,” said Pickering.

In addition, electric vehicle charging stations will drive power management IC growth. “It is hand in glove with electric vehicles,” he said. “There needs to be a large number of power stations to charge EVs.”

PMICs are seeing growing demand from industrial IoT applications. “In general, factories are getting more and more electronic,” he said. More factory machines and processes are being connected to the Internet as manufacturers move towards Industry 4.0, which “is basically the next wave in manufacturing,” said Pickering.

Industry 4.0 involves monitoring and controlling every industrial process with computers and sending data to the cloud so decisions can be about how manufacturing can be optimized for different operations and when factory automation equipment needs to be serviced or if it is about to fail, according to Pickering.

For instance, a mechanical machine such as a lathe will have the ability to transmit all data of its operation to the cloud. “What that means is you need to have a microcontroller and sensors in a wired or wireless network to send all that information up the chain to the next level,” said Pickering. Power management ICs are needed in such an application. “That’s a big area of growth,” he said.