While electronics content in cars and trucks is increasing, the auto industry will continue to account for a relatively small percentage of semiconductor sales over the next five years.

It’s no secret that electronics buyers in the automotive industry have been scrambling to purchase microcontrollers, power management ICs and other semiconductors because of tight supply after production of many components and finished goods slowed down last year because of the COVID-19 pandemic.

Researcher IC Insights says the automotive integrated circuit (IC) market has increased steadily since 1998 when its share of the IC market was about 4.7 per cent. Automotive IC market share increased to 7.5 per cent in 2020 and by 2025, that percentage is forecast to increase to 9.8 per cent. The automotive IC market will post the strongest annual growth rate of any customer segment for ICs with 16.8 per cent annual growth from 2020-2025, the researcher said. In 2020, discrete semiconductor sales to automotive, totaled $4.7 billion and represented about 17 per cent of all discrete sales, the researcher said.

For all semiconductor sales, which include integrated circuits, discretes, optoelectronics and sensors, automotive represents about 9.2 per cent of the total global semiconductor market and that percentage is expected to increase to 11.9 per cent in 2025, according to IC insights.
Despite the growing use of semiconductors in automotive applications, automotive will remain a relatively small segment and will not significantly boost the growth rate of the total IC industry over the next five years, IC insights said. However, automotive will boost revenue for some IC segments. For instance, microcontroller sales to automotive will rise from about $6.1 billion in 2020 to nearly $12 billion by 2025. Automotive’s share of MCUs market will increase from about 39 per cent in 2020 to nearly 48 per cent in 2025, the researcher said.

Because automotive represents a relatively small percentage of the overall IC market, many semiconductor companies “don’t aggressively pursue the automotive market,” said Brian Matas, vice president of research for IC Insights. While automotive is the bread-and-butter segment for some chipmakers, others avoid it because many chips sold to the automotive supply chain generally have lower average selling prices although there are exceptions, such as microcontrollers, said Matas. “I think automotive companies are notorious for being tough negotiators often times there are slim margins for the automotive IC supplier,” he said.

Most automotive ICs don’t use leading-edge technology. “A lot of them are still built on 200mm wafers and bigger process technologies,” said Matas. “The strong reliability requirements may put some suppliers off,” he added. Testing requirements of automotive may be a deterrent for some chipmakers who may be thinking of jumping into the automotive market. “You also have to have a commitment to real long product lifecycles”, said Matas. 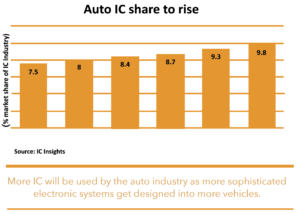 More demand from 5G
Many chipmakers focus on communications because demand for communication gear will be strong for years. One reason is the rollout of 5G technology. Wireless companies are building out 5G infrastructure and cell phone manufacturers are designing and manufacturing 5G phones. New 5G phones will have a higher semiconductor value. For instance, the blended materials cost for the iPhone 12 with 128GB NAND flash is nearly $415, a 21 per cent increase over the iPhone 11, according to Counterpoint Research. Some of the cost increases are driven by 5G-related components, including a 5G modern, transceiver and RF front-end system collectively which account for a $34 increase.

Most analysts and semiconductor manufacturers say 5G will help drive chip sales, but it is hard to determine how much and when. Some say it may take 10 years before 5G has a significant impact. Others say there is already incremental growth. Most agree that eventually 5G will be an important driver of semiconductors.

“Five-G will be a significant contributor to semiconductor demand over the next 5 to 10 years,” said Jim Feldhan, president of Semico Research. In the short term, semiconductors will be needed for the buildout of the 5G infrastructure in regions like China, the U.S. and Europe.

“But the real boom” will occur when the infrastructure is in place and “new applications spring up,” he said. “We are anticipating that we will see applications that people just did not think of using 4G technology.”

One such application that 5G will enable is “smart cities.” Using 5G technology cities will be better able to control and route traffic in cities. “The reality of that will be when 5G is built out you can have real-time communication with vehicles in the transportation system to make substantial improvements,” said Feldhan.

Michael Yang, senior director semiconductors for research firm Omdia, said smart cities would use 5G, sensors and “other digital methods to collect data from devices, cameras on buildings and streets.” Insights gained from that data would be used to manage assets, resources and services efficiently including traffic and transportation systems, power plants, utilities, water supplies, information services, and other networks, said Yang.

Such an application will drive further semiconductor demand. The question is how long will it take for 5G to enable smart cities. “It’s going to be more than five years,” said Yang. “It could be 10 years or could be 50 years. I can’t put a number on it,” he said. 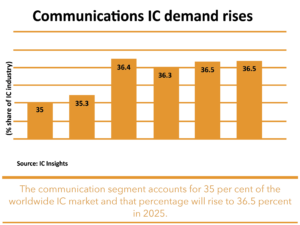 More 5G applications coming
Feldhan noted that 5G speeds right now aren’t as fast as they eventually will be. “A lot of people are talking about gigabit speeds on your phone,” said Feldhan. “That opens up the doors for a of new applications for artificial intelligence and augmented reality, all those things that take significant bandwidth and latency needs to be really low,” he said.

Five-G will drive demand for a lot of different semiconductors from chipmakers. “It’s going to be broad-based demand because there will not be one killer IoT application that will stand out,” said Feldhan. “It will be hard for one company to dominate all these 5G applications.”

Five-G applications will require a processor or microcontroller, memory, and power management chips as well as other discretes, passives and connectors. “But I think one of the big beneficiaries will be RF chips because to get those speeds you need multiple radios, “ said Feldhan. Every application that requires 5G speeds are going to need “five, six, or seven radios and that’s going to be big for the RF IC manufacturers. Analog, power management and some type of memory will also be needed, he said.

Because it will take years for 5G speeds to increase to the point when 5G applications such as smart cities can be enabled, “5G right now will provide a little boost in IC sales, but I don’t want to get too excited about it,” said Matas. He noted that 5G infrastructure buildout is still a work in progress.

“It is not quite in place and not as widespread as it needs to be to take advantage of the technology from phones to cars to homes to office buildings and so on. The impact of 5G will probably take 10 years to blossom,” he said.
However, as infrastructure is being built, it will require more ICs and other components so component demand will gradually grow. The good news for chipmakers is 5G will need more components than previous wireless communication technologies such as 4G and 3G because 5G signals don’t travel the same distance as other cell phone signals.

Five-G requires more small cells, or cellular antennas because it uses higher-frequencies, which have shorter ranges than 4G frequencies. “So, you need more antennas or relays or cell stations to transfer signals from one point to another,” said Matas. More equipment means more chips and other components will be needed. 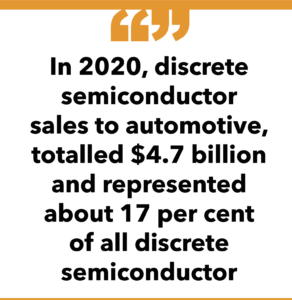 5G drives wireless chip demand
While 5G will be especially good news for chipmakers that make communications ICs and wireless chips, other chipmakers will benefit as a wide range of semiconductors will be needed.

Phil Solis, research director, connectivity and smartphone semiconductors for IDC, said 5G will have a positive impact on the overall semiconductor industry over time.

“Some of the boost in semiconductor demand from 5G will be real but some of it is being overhyped,” he said. “There will be 5G networks but it will take time.”

In the short term “we see 5G picking up quickly with the smart phone market,” said Solis. “A lot of the market for 5G has been tied to a more complete version of 5G and we are nowhere near that right now.”

The first phase of 5G is replacing some low-band 4G spectrum and “there’s almost no benefit except for marketing,” said Solis. He said about one third of smart phones that ship in 2021 will be 5G which will account for two-thirds of mobile phone revenue. In 2022, 45 per cent of smart phone shipments will be 5G and the percentage will continue to rise over the next several years.

“The phase that is happening right now very rapidly in China and the US and starting in Europe is mid-band rollout,” he said. Mid-band spectrum uses 2.5, 3.5 GHz and 4.5, he said . “You can do a lot of wide channel with that and get much higher data rates. It supports many different users at the same time,” said Solis. “You can use the same spectrum at the same time from multiple users and increase the data rate and the capacity.”

However, millimeter wave “is the real 5G and that will start next year and really ramping up in 2024,” said Solis. “That is the pathway to 6G as well,” he said.

Lastly, there is mobile edge computing (MEC) on the network and “that’s when things really change,” said Solis. Five-G networks are a platform for devices to connect to where a lot of the computing can be done on the 5G network on the edge, “which means you don’t have to rely totally on the device or deep into the cloud,” he said. “You can run things on the edge of 5G network.” That will open the door to augmented reality applications and a lot of “new use cases that we haven’t thought of,” said Solis.

He said mid-band 5G is rolling out right now and MEC will ramp over the next five years. In the next five to 10 years the real potential of 5G will be realized, he said. This will drive semiconductor demand because there will be more connected devices that require more intelligence and computing capability. More sensors, microprocessors, microcontrollers, and memory will be needed, as well as other semiconductors, passives and connectors.