NAND flash revenue will break an all-time record this year.

Despite an expected 1 per cent decline in average selling prices, the global NAND flash memory market will post strong sales growth and NAND revenue will grow 22 per cent to $67.1 billion in 2021 as unit shipments increase 23 per cent, according to researcher IC Insights. In 2020, unit shipments increased only 4 per cent but sales soared 25 per cent to $55.1 billion because of a 21 per cent increase in the average selling prices. This year revenue growth will be strong despite a 1 per cent decline in the average NAND price, according to the researcher.

The average price increased from $3.57 in 2019 to $4.30 in 2020. In 2021 the average price will dip to $4.26, IC Insights forecasts. Demand for NAND is rising across all segments that use flash memory including data centers, computers mobile phones, consumer electronics, automotive and industrial.

Flash memory manufacturers including Samsung, Kioxia, Micron and SK Hynix and others are seeing surges in demand, according to Brian Matas, vice president of market research for IC Insights. As a result, there are long lead times and some shortages for NAND.

Supply will remain tight for the rest of the year for NAND used in data centers, he said. In addition, supply could become tight for some consumer applications particularly 5G cell phones.

More capacity added
But overall, “I think things are doing pretty well in terms of NAND supply,” said Matas. One reason is NAND flash manufacturers have been adding capacity. He noted suppliers such as Samsung, SK Hynix and Micron increased capital expenditures for NAND in 2017 and 2018 and “that’s what caused the big downturn in 2019” when there was oversupply and declining prices. But that capacity is now being used and utilization rates are in the 90 per cent plus range, said Matas.

Flash suppliers are continuing to increase capacity this year, he said. “Samsung built a gigantic fab that has several floors to it and each of the floors can manufacture NAND or DRAM,” said Matas. A lot of the fab capacity has been committed to NAND. The fab uses 300mm wafers and the “smallest process geometries” that are available for NAND, he said.

“I’m not sure how much Samsung is going to spend on NAND capacity this year, but in the second quarter alone the company made $11.1 billion in capital expenditures,” said Matas

Other NAND manufacturers are also adding capacity, although not as much as Samsung. Micron is spending $4.5-$5 billion for the year and Hynix is making about $7 billion in capital expenditures for the year, according to Matas.

By boosting capital spending and increasing NAND capacity, Samsung is keeping the pressure on its competitors including Chinese companies that have entered the NAND flash market, said Matas.

NAND demand to rise
By most accounts the extra capacity will be needed, as demand for NAND shows no signs of letting up. Demand for NAND flash from data centers, 5G phones, PCs, tablets, consumer electronics and other customer segments is growing.

Data centers spending on NAND was strong in the first half of last year but cooled in the second half, said Walt Coon, vice president of NAND and memory research, for researcher Yole Développement, based in Lyon, France. “Demand this year from data centers is rebounding as cloud service providers are once again building out their data centers and purchasing a lot of memory,” said Coon.

“New microprocessors for systems that operate Windows 11 will be required to have more memory in them” which will mean more NAND will be needed, said Matas.

A small but growing segment for NAND flash is automotive. Less than 1 per cent of NAND chips are used by automotive. “But it is growing fast,” said Coon. As more cars “progress into different autonomous levels from L1 to L2 to L3, L4 and L5 there is more need for storage on the vehicle but that will not occur for a while, he said. A L5 level vehicle would be totally autonomous and would not need a driver and would be equipped with more semiconductors including NAND flash memory.

“We look at autonomous vehicles as one of the next big drivers like smart phones,” he said. Smart phones were a boon to NAND memory and L4 and L5 vehicles will have a similar impact, he said.

Today most NAND going into vehicles is for infotainment systems. “ “Basically, you have a tablet PC on a lot of these newer cars and it has anywhere from 32 to 256 GBs of storage,” said Coon. About 100 million cars ship in a year compared to 1 billion smart phones, he said. So automotive is using a relatively small amount of NAND. 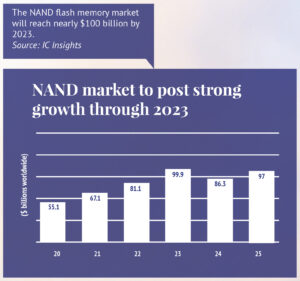 More NAND for cars
In fact, while NAND use in automotive systems will grow, it will remain a relatively small percentage of the overall NAND market at least for the next five years, according to Coon. In five years, automotive will represent about 3 per cent of the NAND market, he said.

For this year, strong demand from automotive and all other segments will mean continued tight supply of NAND flash memory, at least for the rest of the year. He said that NAND supplier inventory is “very lean which is helping drive supply/demand balance in a better direction” for suppliers, said Coon. “Revenue is going to break an all-time high this year, he said. Yole forecasts that NAND revenue will grow 25 per cent.

Strong growth for NAND will continue in 2022 but at a slower rate than in 2021, according to Coon. “I’m of the opinion that things will slow down a little bit,” said Coon. “I think some of the things that have been boosting up demand this year may soften as we go into next year,” he said.

He noted that PCs have been a “surprise market” over the past two years. PCs had been a slowly declining market prior to 2020 but sales rebounded when the pandemic hit as more people worked at home or attended school virtually.

PC growth to slow
Coon said strong growth in the PC market will not continue every year. In addition, demand for NAND from data centers will also slow. Spending by data center companies is “fairly lumpy,” said Coon. “They will spend a lot for two or three quarters and then they will go through an inventory digestion phase,” he said. “So, I would not be surprised to see one of those inventory digestion phrases next year.”

He said while demand may lessen next year, so will NAND production. NAND bit production usually increases about 40 per cent per year.

“So, it looks like it would be tough to grow bit shipments with the technology transitions,” said Coon.