Demand for integrated circuits and discretes will weaken in 2022 resulting in more stable pricing and slower revenue growth.

The global semiconductor market will grow 8.8 per cent to $601 billion in 2022 after rising more than 25 per cent in 2021, according to World Semiconductor Trade Statistics.

Despite supply chain challenges caused by the Covid-19 pandemic, worldwide chip sales were expected to end 2021 increasing to $552.9 billion after growing 6.8 per cent in 2020. The 2021 growth rate was the strongest growth rate for the semiconductor industry since 2010 when revenue increased 31.8 per cent, according to WSTS.

Strong demand for consumer electronic products, including computers,  tablets and smart phones among other devices, drove all semiconductor categories to double-digit growth rates, except optoelectronics in 2021. Memory ICs, including DRAM and flash memory, had the strongest growth rate. Memory chip sales rose 34.6 per cent to $158 billion. Analog chip sales increased 30.9 per cent to $72.8 billion and logic revenue rose with 27.3 percent to $150.7 billion, WSTS said.

Chip sales in the Americas were expected to end 2021 growing 24.6 per cent, while sales in Asia would increase 26.7 per cent and chip revenue in Europe would rise 25.6 per cent, according to WSTS.

The bad news for chipmakers is semiconductor demand and revenue will cool in 2022 and price increases will lessen, according to industry analysts. More capacity is coming online which will help alleviate long lead times for some semiconductors and help stabilize prices. Overall, integrated circuit prices will increase 1 per cent in 2022 after increasing 3 per cent on average in 2021, according to IC Insights.

Move towards balance
Brian Matas, vice president of market research for IC Insights, said semiconductor supply and demand will move toward being in balance next year at least for chips used in certain applications. “Maybe by the middle of the year, the supply/demand balance is going to even out in several applications,” he said. However, demand will remain strong and supply tight for chips used in automotive systems.

There may be a “little bit of easing in chip supply for  automotive toward the end of the year but for most of the year, there will be shortages,” said Matas.

But there should be less demand for semiconductors from computer and consumer electronics equipment manufacturers. Matas noted there was “big demand” for chips by those segments in 2020 and 2021 because many people worked and were schooled at home and many families purchased new computers, tablets and other electronics gear. In addition, data centers also invested in new systems and semiconductor demand increased sharply.

Computer sales won’t be as strong in 2022 “which will reduce growth for a lot of the chips that are used in computing,” he said.

Consumer spending on electronics will not be as robust in 2022 as it was over the previous two years. “There’s a little concern about consumer buying power,” said Matas. Next year, with no more stimulus checks being sent by the government and with rising inflation, consumers may be a “bit more diligent about spending on some electronic products,” said Matas.

“There’s a lot of concern for the consumer segment in general and how much consumers will be active in the market in 2022,” he said. 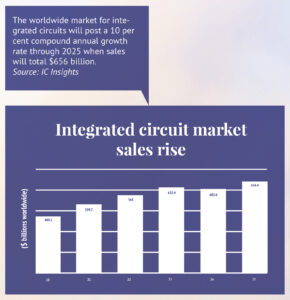 More capacity coming
While chip demand may slow in 2022, more semiconductor capacity will be coming online because of increases in capital spending by chipmakers in 2020 and 2021.

Semiconductor capital spending in 2021 was expected to rise 34 per cent to $152 billion according to IC Insights. “The last time we saw a number that big was in 2017 when DRAM and NAND flash memory manufacturers were investing a lot because of the transition to 3D NAND,” said Matas.

Samsung, TSMC, GlobalFoundries and Intel are making large investments in capacity. Samsung and TSMC will spend $30 billion each on capacity expansion, according to Matas. Much of the investment will be for NAND flash and DRAM and Intel’s spending will be for microprocessor capacity.

The bad news for a lot of buyers is that the capacity investment is occurring for high-end semiconductors that use the latest process technologies on 300mm wafers and not on standard, lower priced standard chips. More mature chips, such as power semiconductors, analog, standard logic and microcontrollers, are made on 200mm or smaller size wafers and use more mature process technologies.

“I really don’t think you see a big expansion industry-wide for some of the more common devices that are used across many applications,” said Matas. However, there is some investment in 200mm capacity. Trade association SEMI says  semiconductor manufacturers will increase 200mm fab capacity by 17 per cent from 2020 through 2024 when total 200mm wafer production will reach 6.6 million wafers per month. 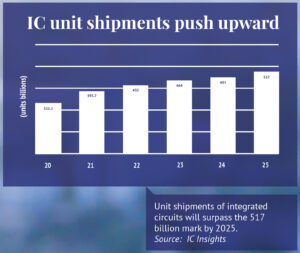 There is some investment by chipmakers to make analog and other standard chips on 300mm wafers. Onsemi purchased a foundry in East Fishkill, N.Y, and has started the company’s first 300mm wafer production. The fab will be able to produce 20 per cent of the company’s chips.

In addition, in November Texas Instruments announced it would build a 300mm fab in Sherman, Texas. Construction was expected to begin in 2022 and the fab will produce analog chips for the automotive and industrial markets. TI’s future analog and embedded processing 300-mm fabs are part of the company’s long-term capacity planning to continue to strengthen its manufacturing capabilities to support customer demand “in the coming decades,” said Rich Templeton, TI’s chairman, president and CEO.

Production from the first new fab is expected in 2025. With the option to include up to four fabs, total investment potential at the site could reach approximately $30 billion.

Alan Priestley, vice president analyst at researcher Gartner, said there is actually minimal investment occurring with 200mm production capacity. “Our belief is 200mm capacity was maxed out before this all started.

It was close to maximum capacity before the pandemic,” he said. While some new 300mm fabs are being built for analog and other standard chips, it is not viable for all chipmakers to convert their 200mm existing fabs to

Chipmakers who want to increase 200mm capacity face another problem. It is difficult to find the tools needed tools to build semiconductors on 200mm wafers. “We know that the secondhand market for 200 mil tools is tight,” said Priestley. “You can make a fortune for that equipment these days. In China the secondhand tool market, you are paying 10x the price of tools compared to 10 years ago,” he said.