Purchase commitments made by OEM customers during the period of product shortages will keep distribution sales and profits high through the rest of the year despite signs of a market slowdown.

Electronic component distributors will be among the brightest stars of the high-tech world during this reporting season with sales and profits expected to barrel through estimates on a spike in demand for their services over the last year. A review of analysts’ forecasts confirms publicly traded distributors will individually report double-digit revenue increases for the second quarter and even the entire year.

Distributors typically perform well during times of high growth and supply shortages as harried OEMs desperate to keep manufacturing plants humming buy up available inventories or commit to premium prepaid supply agreements. Inventories acquired by distributors ahead of explosive growth are often sold at higher prices, buoying sales as well as margins. That has been the case thus far for all component distributors with specialty distributors benefitting even more as OEMs scrounged around for components headed into key economic sectors like automotive, IoT, data and networking equipment, according to industry executives.

“Our experience and expertise allowed us to identify supply chain issues in the market early, hence, the investments we made in inventory during the course of the year,” said David Egan, CFO at RS Group, while presenting the company’s fiscal 2022 results. “Working closely with our suppliers to secure and invest appropriately in greater levels of inventory provided strength in availability and drove performance of the top line.”

In May, the specialty distributor reported revenue surged 28 per cent in the fiscal year ended March and noted in an update early in July that sales remained strong in the June quarter although they were trending down amidst changes in the “macroeconomic environment and increasing inflationary pressures,” according to CEO Lindsley Ruth, in a statement.

“Given our strength in the first quarter, we now expect our full year revenue and profit to be slightly ahead of current consensus estimates. Like-for-like revenue [grew] 18 per cent, despite significantly tougher comparatives,” Ruth said. “Gross margin improvements reflect an improved pricing and discount model and product management work.” 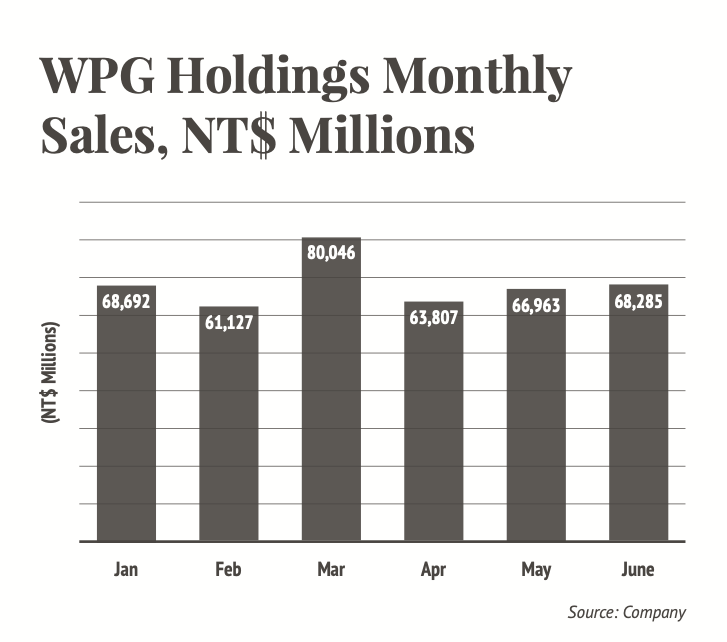 This is the storyline distribution executives will be parroting as they report June quarter results and through the rest of the year. The market is reportedly weakening but distribution will maintain its robust growth for a while longer. The industry segment tends to be the last to be impacted by industrywide slowdowns and, conversely, it is typically the last to experience the benefits of rapid expansion when the market starts to recover.

News from WPG Holdings, the largest electronic components distributor in Asia, reflect this trend. The Taiwanese distributor reported second quarter sales of $6.67 billion, (NT$199.06 billion) rising to the “high side of forecast.” Sales were about the same for the comparable 2021 quarter – NT$200.23 billion – pointing to a slowdown in the company’s growth pace that has not been reported by the broader market. In the 2021 second quarter, WPG Holdings’ sales grew 33.7 per cent from the second quarter of 2020, the company said.

The monthly sales figures from WPG Holdings give the impression of a weakening market (see chart) that is not fully supported by the performance of its peer in North America. The company’s year-over-year performance has swung from strong positive to mild and negative growth since the beginning of the year. The company’s zigzag financial results for 2022 so far may have a different underlying cause related to actions taken by China to curb the spread of Covid-19. Unlike North America-based Arrow and Avnet, its biggest competitors, WPG Holdings has a greater exposure to China, which earlier this year locked down Shanghai, a major center of electronics production. The result of the two-months long restriction on movements was a sharp slowdown in electronic output and this may have hurt WPG Holdings’ results.

As at the time of reporting Arrow and Avnet had not announced second quarter financial performance and both companies would not comment on their results. However, analysts have maintained positive forecasts for the two companies, although they are more bullish on Avnet. The Phoenix-based components distributor was projected to increase revenue by more than 20 per cent in the June quarter. The consensus analysts’ second quarter revenue estimate for the company was $6.3 billion, up 20.4 per cent, from $5.23 billion, in the 2021 comparable quarter. For Arrow, the analysts on average were expecting the company to post sales of $9.39 billion, up about 10 per cent, from $8.56 billion, in the year-ago quarter.

Arrow runs a calendar year and reported strong sales performance in 2021, with sales rising to $34.5 billion, up 20 per cent, from $28.7 billion, in 2020. The double-digit sales increase followed tepid performance in the prior two years when Arrow’s sales stagnated at around $29 billion. The company’s growth rate is slowing, but analysts still expect it to report an uptick in 2022. The current projection is for sales to decline slightly in 2023, decreasing 1.2 per cent, to an estimated $37.1 billion from the current forecast of $37.6 billion for 2022.

The component distribution business can expect more of such wavy performance in 2023, starting in the last quarter of 2022. Growth has been exceptional in the last couple of years, and it is exceedingly difficult for the leading distributors to maintain double-digit annual increases especially now that regulators are jacking up interest rates globally to combat rising inflation.

But while distributors will face mounting pressures in the coming months and especially in 2023, their order books are still heavily swollen from bookings made by OEMs in the heat of the recent market shortages. Many OEMs signed what distributors term “non-changeable and non-cancellable” delivery orders last year and in the first half of 2022 and will feel compelled to fulfill these commitments, according to industry sources.

To ensure they can satisfy OEM demands, distributors in the last years similarly signed tight contracts with suppliers and are on the hook for the components produced by their supply partners. Companies like Arrow have said the inventory costs would be passed on to customers.

“The recent global semiconductor shortages have resulted in some suppliers increasing the amount of non-cancelable orders, which limits our ability to adjust down our inventory levels in the event of market downturns and could have a negative impact on the financial results of the company,” Arrow said, in its 2021 annual filing with the U.S. Securities and Exchange Commission. “The company seeks to limit these risks by passing non-cancellable terms on to customers, where possible.”

Distributors will be relying on long-term relationships with suppliers and OEMs to help resolve such knotty issues. They will also bet on the dawning realisation by OEMs that they need distributors to help navigate through the increasingly complex supply chain channels, according to industry executives, who said they expect engagements forged during the period of extreme shortages to remain intact and valuable afterwards.

OEMs learned the important lesson that distributors should be a critical part of their extended supply chain and they will not abandon processes put in place to assure they can continue to benefit from this realisation, said Mark Bollinger, chief globalisation officer at distributor N.F. Smith & Associates.

“One lesson that our OEMs customers have learned during this period of shortages is that they must stay on top of the supply chain,” Bollinger said. “This is a high priority for everyone.”