Semiconductor ASPs have crashed, losing a large chunk of the upturn gains and pointing to the beginning of another downcycle but how long will this weakness last?

Memory semiconductor sales slumped starting in the second quarter, marking the beginning of the industry’s latest downturn although observers say it will take at least two additional quarters before the actual demand-supply direction becomes clearer. This is because semiconductor manufacturers are still receiving inconclusive data from the different end-markets about the economy, including for capacity utilization rates, customer demand and supply chain patterns, according to industry executives and analysts.

What is clear, though, is that after more than a year of climbing to dizzying heights, average selling prices (ASP) for memory products, many other semiconductor components and passive parts have begun trending down at a double-digit pace with growing concerns this could accelerate within the next several months as OEMs and their supply chain partners draw down swollen inventories. The price declines have been uneven, as some industry segments are still reporting high ASPs and long-lead times, analysts said. Overall, though, the trend shows the electronics industry is likely to enter negative growth territory soon, they said.

“The downturn actually broke in June 2022, with a huge implosion in sales driven by a slowdown in unit shipments and an 18 percent fall in ASPs, from the second quarter’s $1.350 peak to $1.105, wiping out in one month 77 percent of the Super-Cycle’s gain,” said Malcolm Penn, CEO and principal analyst at Future Horizons, a U.K.-based semiconductor research company. “Granted downturns are always uneven and patchy at the start, partly driven by their commodity nature, or not, and partly because there is at least four months of work-in-process production in the wafer fab pipeline which cannot be stopped, but we firmly believe no sector will prove 100 percent immune.”

The semiconductor industry was not expecting 2022 to end on such a dismal note. The outlook at the beginning of the year was rosy and most projections were for another double-digit growth rate for the entire market. The World Semiconductor Trade Statistics (WSTS), for example, had projected revenue growth of 10 percent for 2022 at the beginning of the year and jacked this above 16 percent for the year by June. The industry association predicted then that memory sales would be 19 percent higher than in 2021 on surging demand from all end markets.

That picture has since changed. While the WSTS is still maintaining its double-digit growth rate for 2022 other market forecasters are predicting a different outcome. Penn at Future Horizon now sees IC sales rising only 4 percent in 2022, down from his prior forecast of 6 percent market expansion in May and 10 percent in January, “due to worsening economic outlook and consumer spending squeeze.” The industry, Penn said, will start the next year caught in the throes of another one of its infamous downcycles.

“The 17th industry down cycle has now definitely begun,” Penn said. “We have revised our 2022 forecast down to 4 percent growth, but held our 2023 outlook at a 22 percent decline, back to around $450 billion, and all things being equal, we should be back to single-digit positive growth in 2024.”

Lower unit shipment and sliding ASPs will account for much of the projected revenue decline for 2023. Memory manufacturers are already feeling the heat and the leading players have begun taking steps to reduce expenses to reduce the impact of the weaker performance on operations. Capital expenditure budgets are being trimmed only months after many of them announced what analysts said amount to the biggest spending spree in 20 years.

“The memory and storage industry environment has deteriorated sharply. 2022 industry bit demand growth for DRAM is now expected to be in the low-to-mid single digit percentage range, and for NAND, slightly higher than 10%,” said Sanjay Mehrotra, CEO of DRAM vendor Micron Technology Inc., during a conference call with analysts. “An unprecedented confluence of events has affected overall demand including COVID-related lockdowns in China, the Ukraine War, the inflationary environment impacting consumer spending and the macroeconomic environment influencing customers’ buying behavior in multiple segments.”

Micron, which announced fiscal fourth quarter sales in September, is a bellwether for the memory market and by extension the entire chip industry. The company reported record strong revenue growth for the fiscal year ended September 1, but its fourth quarter performance paled beside the solid sales posted in the prior quarters. Revenue for the fiscal fourth quarter dropped both sequentially and year-over-year, to $6.64 billion, compared with $8.64 billion in the immediately preceding quarter and $8.27 billion in the year-ago comparable period. 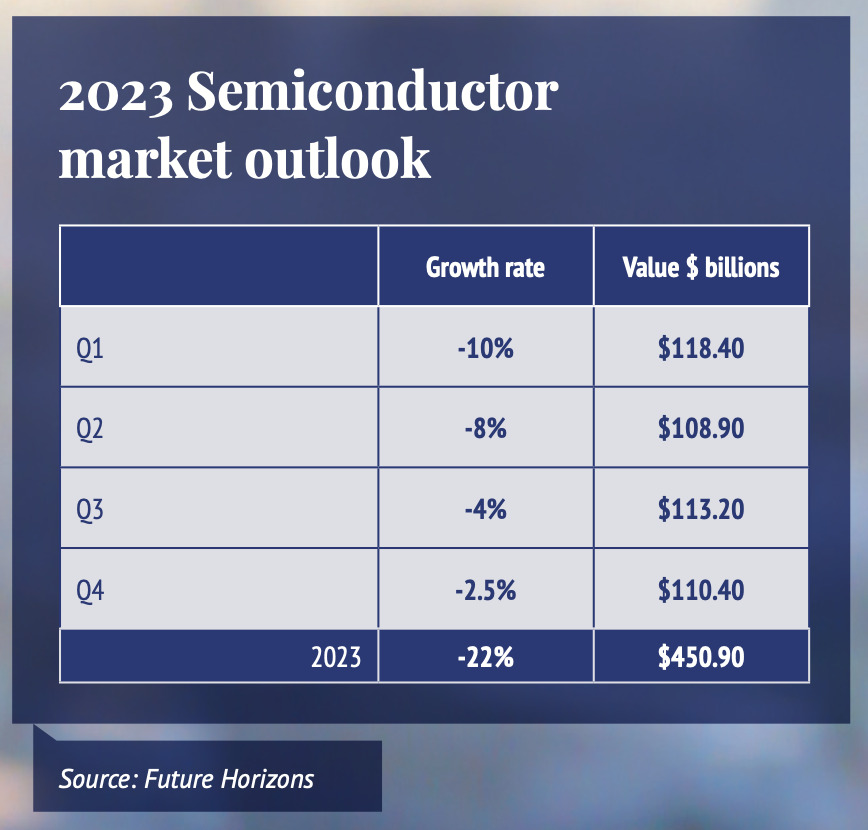 The outlook for the current quarter is telling, pointing to a sudden decline across Micron’s key markets and highlighting what awaits most semiconductor companies in the final quarter of the year. Micron now projects sales of $4.25 billion, plus or minus $250 million, for its fiscal 2023 first quarter, down sharply from $7.7 billion in the first quarter of fiscal 2022.

While unit shipments will go down during the period, the pressure for the company is coming more from on the gross profit margin (GPM) front. Micron said tumbling ASPs, combined with reduced shipment will dent gross profit in the ongoing quarter. It forecasts GPM for the current quarter will drop to 25 percent, plus or minus 2 percentage points, from 46.4 percent in the comparable quarter of fiscal 2022.

GPM and ASP swings like this happen too often in the memory semiconductor market because of its higher exposure to the consumer electronics and PC markets. This weakness has been more recently exacerbated by demand-supply pressures from the data center and cryptocurrency mining markets, according to industry executives.

“In fiscal Q4, data center revenue was down both sequentially and year-over-year, driven primarily by declines in ASP,” Micron CEO Mehrotra said. “Inventory adjustment at customers across all end markets are also contributing to demand weakness. These factors are depressing demand for DRAM and NAND to well below end market consumption levels. We are also seeing an extremely aggressive pricing environment. Due to the sharp decline in near-term demand, we expect supply growth to be significantly above demand growth in calendar 2022, contributing to very high supply inventories for both DRAM and NAND.”

Similar stories will crop up as semiconductor manufacturers announce results for the September quarter and their outlook for the fourth quarter as well as projections for 2023. Consensus from the investment community is that lower ASPs will hurt sales and crimp corporate profits. They will also impact capital expenditure plans, which means some of the exuberant fab announcements made over the course of the last year may be pulled back, at least until the market recovers again.

It is a cycle the industry has gone through numerous times, though. Each pullback in spending plans directly results eventually in reduced overall manufacturing capacity, setting the stage for the component shortages, long lead times and price spikes that have in the past ravaged the market. This time, though, industry observers see a shorter downcycle, arguing that the semiconductor market fundamentals remain strong. Demand will eventually bounce back in markets such as data center, connectivity, industrial and consumer electronics because of continuing interest in the higher productivity and innovation opportunities semiconductors continue to foster, they said.

In turn, the expected upswing, which Future Horizon’s Penn believe will start in the second half of 2023, will strengthen prices again and push up margins. Semiconductor manufacturers must take steps to survive the expected weakness, work with vendors to lessen and spread the pains of lower ASPs and ensure their innovation engines are primed for the eventual upturn, he said.

“Downturns are a structural part of the industry psyche, which is quite natural and normal. They

are also a time when longer-term market share gains are best made. It is also a time when innovation comes to the fore,” said Penn. “Firms need to emphasize new products to differentiate from their competitors and invent their way out of the crisis. Innovation tends to slow during an upturn as foundries and IDMs ration R&D access to scarce wafer fab capacity. The opposite happens in a downturn when fab capacity becomes abundant. As a result, R&D and new IC design activity always accelerates during a downturn and, as with the past cycles, the downturn beneficiaries will be the IC design houses, EDA industry and leading-edge suppliers.”