While demand for high-brightness LEDs will grow this year, availability will remain high and prices will decline because of overcapacity.

Oversupply, overall weaker demand from key customer segments and declining prices resulted in a 10 per cent decline in the high-brightness LED (HB-LED) market in 2020 as total LED revenue fell from $13.1 billion in 2019 to $11.8 billion in 2020.

“Most of the semiconductor segments have seen growth this year in 2020,” said Ron Lineback, senior market analyst for IC Insights. However, the LED segment was “probably hit the hardest in 2020 during the pandemic as sales fell 10 per cent. In comparison the overall semiconductor market grew 5.1 per cent last year, according to World Semiconductor Trade Statistics (WSTS).

Paul Scheidt, product marketing manager for LED manufacturer Cree, said that LED revenue has actually decreased the past two years by double-digit percentages. “There was a 10-15 per cent drop in 2019 due to the US-China tariff/trade war and a massive slowdown in automobile demand,” he said. There was another 10 per cent drop in 2020 mainly due to COVID-19 and “mostly impacting just the lighting and video screen sectors,” he said.

The good news for Cree and other LED manufacturers is over the next few years there will be a “mild recovery, mainly driven by the ongoing adoption of LEDs into automobile forward lighting and higher resolution LED video screens,” said Scheidt. He said, automotive and all LED applications, are “returning to more normal levels of growth and adoption. However, we are now starting from a much lower baseline than anticipated a few years ago. A return to 2019 revenue levels will take years,” he said.

IC Insights says the worldwide high-brightness LED market will post 6 per cent revenue growth in 2021 as automotive, interior and exterior lighting and other key segments recover and HB-LED sales will reach $12.6 billion while the overall LED market grows to $13.5 billion.

Scheidt said the three applications that will drive LED growth over the next few years are automotive forward lighting and video screens “as well as more niche non-visible applications, including UV-C LEDs for sterilization applications and IR LEDs for mobile phone facial recognition. He added the “’LED-ification’” of lighting is pretty much done, so there really are no major growth drivers in that sector on the horizon.

There have been a lot of efforts to create a “killer app” for commercial lighting, such as IOT/connected applications or human-centric solutions. “But the reality of COVID-19 is that people spend a lot less time in commercial spaces than they used to. There just isn’t the demand for higher technology lighting for spaces that aren’t being used right now,” said Scheidt. 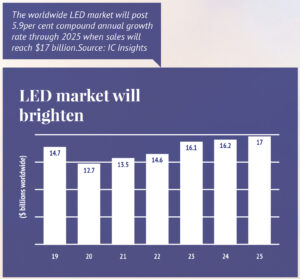 Oversupply, lower tags likely
The good news for buyers is that there will continue to be oversupply and prices for LEDs should fall about 6 per cent in 2021, the same price decline as 2020, the researcher said.

The biggest customer segments for HB-LEDS include interior and exterior lighting, cell phones, television and computer screens and automotive, according to IC Insights. LED demand from those segments is expected to increase especially in the second half of the year as the overall economy improves as the impact of COVID-19 lessens due to vaccinations against the virus.

COVID-19 was one reason that unit shipments and sales revenue declined in 2020, but it wasn’t the only one. “The LED industry has been in major overcapacity for many years,” said Scheidt. The drops in demand in 2019 and 2020 “didn’t do anything to change that situation. We’ve seen some delays with some of our material suppliers due to COVID-19 related production disruptions but that is starting to settle out now,” he said

Overcapacity has made it harder for LED manufacturers to grow sales, said Lineback. Also contributing to declining demand was a weak economy in 2019 and 2020.

“LED makers have been talking about 200mm wafer production since early last decade, but with the glut on the market, few have made the move,” said Lineback.

He noted in 2012, Toshiba announced it was ready to ramp LED production on 200mm GaN-on-silicon wafers in an existing mature IC fab. But the company pulled out of LEDs about four years later because of huge losses in a new restructuring plan, said Lineback. He added that Samsung researchers have talked about continuous improvement in 200mm GaN-on-Si HB-LEDs, but” it is still a small percentage of its output.”

“You hear of several companies promising 300mm production of LEDs, or at least “roadmaps to 300mm from 200mm LED-making wafers, but these are not in volume manufacturing plants,” said Lineback. “Most of these companies are looking to license their technology,” said Lineback. He estimates that less than 10 per cent of LEDs are made with 200 mm wafers today.

Competition from China
There is likely to be a continuation of excess LED supply due in part to Chinese companies who have gone into the LED business and their production yields are improving. Major LED manufacturers such as MLS and NationStar have increased capacity, he said.

With supply increasing, prices will continue to drop and revenue will rise but will be muted even if unit shipments increase. “We’ll have 6 per cent drop in the prices in 2021. Price erosion is quite as bad as it has been over the last five years,” said Lineback.

Despite falling prices in 2021 the longer-term outlook for high-brightness LEDs will improve. The forecasted compound annual growth rate through 2025 for LED revenue is expected to be 5.9 percent, while unit CAGR will be 9.9 per cent, said IC Insights. From 2015 to 2020 LED CAGR was -2.2 percent while unit CAGR was 3.2 percent.

However, while there will be an increase in LED demand over the next five years it will remain a competitive market at least through 2021. It should still be a buyer’s market in 2021, because of oversupply and competition from Chinese LED manufacturers as they try to grow market share.

Capacity will remain high at least through the year although there has been some consolidation among LED manufacturers. For instance, Cree sold its LED business to Smart Global Holdings and the deal is expected to be final in the first quarter of this year. In addition, OSRAM was sold to ASM for $5 billion last year. More consolidation could occur as manufacturers continue to struggle to grow sales and improve profitability.