Growing demand from key customer segments and the transition from 16-bit and 8-bit MCUs to 32-bit microcontrollers will result in robust sales growth for 32-bit controllers.

Semiconductor buyers can expect constrained supply of 32-bit microcontrollers at least through the first half of 2020 because of strong demand from automotive, medical and industrial equipment OEMs and their contract manufacturers.

Lead times have stretched since the first of the year and could stretch further in the second quarter, according to industry analysts.

Strong demand will result in nearly 9 per cent revenue growth for the 32-bit MCU market as sales rise to $11.9 billion in 2021, according to researcher Gartner, Inc.

Such growth will be welcome news to MCU manufacturers because MCU sales grew modestly in 2020 because of the impact of the coronavirus pandemic. “MCUs kind of followed the overall semiconductor market,” said Jim Feldhan, president of Semico Research.

“MCUs fell off in the first quarter”, said Feldhan. They had a big hole to crawl out of,” he said.

The electronics industry started to recover in the third quarter and demand for 32-bit MCUs started to come back and business was near normal in the fourth quarter, especially in the automotive segment. MCU sales to automotive manufacturers ended up being a “little less than in 2019” when sales grew strongly, according to Chris Morris, senior market analyst for researcher Omdia. Automotive is the single biggest customer segment for MCUs.

MCU recovery has continued and “we see the 32-bit market bouncing back in 2021” and sales will be higher than in 2019, he said. Segments that were solid in 2020 such as storage, and computing will continue to be strong. 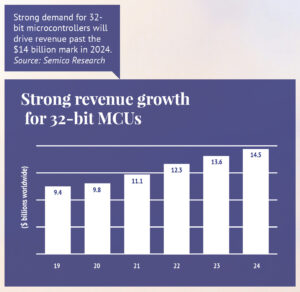 Foundry capacity remains tight
While MCU demand is rising, supply and production capacity, especially at foundries, is constrained in the first quarter.

“MCU demand is being driven by “growing electronic equipment demand from industrial automation” equipment for unmanned operations and surveillance cameras as well as PC peripherals and the automotive market, said Amy Teng, senior research director at Gartner. In addition, migration away from 16- and 8-bit controllers is resulting in greater 32-bit MCU demand.

Rising semiconductor demand and constrained capacity at foundries will cause lead times to stretch and prices to decline less than in previous years. Thirty two bit MCU prices typically decline each year.

Foundry capacity is constrained for chips made on 300mm and 200mm wafers for several reasons including rising semiconductor demand from PC and smart phone manufacturers making 5G handsets. Demand for servers and PCs increased last year as more people worked at home and attended school virtually because of the pandemic.

MCU tags to dip
Despite strong demand and constrained supply, buyers can expect prices for 32-bit MCUs to fall in 2021, although not as much as in 2020 and previous years, according to Morris. In recent years, 32-bit MCU tags have declined sharply and the price difference between 32-bit and 16-bit and 8-bit MCUs has narrowed.

Smart cards move to 32-bit
One reason for those decreasing sales is declining use of the smaller density MCUs in smart cards. “It wasn’t too long ago where 8- and 16-bit were common for smart cards,” said Feldhan. Now 32-bit MCUs are used, he said. Thirty two-bit MCUs offer higher performance, functionality and security than 8-bit or 16-bit MCUs, although they cost more.

Besides smart cards and automotive applications, two other customer segments that will drive the transition to 32-bit devices are consumer and industrial IoT.
“Consumer products in general are going to begin to shift to 32-bit MCUs as products become ‘smarter’ and more IoT focused,” said Morris. Industrial IoT applications will mean more demand for 32-bit MCUs. “It will be interesting because currently 16-bit is strongest in industrial. That’s probably just an engineering preference,” he said.

However, 32-bit devices will be a better solution for IoT because “the drive in industrial IoT is to connect more things at a central location. We are also going to start seeing artificial intelligence at the edge being done with 32-bit MCUs,” said Morris.

“IoT is a great fit for 32-bit MCUs,” said Feldhan “You can do quite a bit with a 32-bit microcontroller. You don’t need advanced performance system on chip (SoC)” in many applications such as fitness and health devices,” he said.

One reason the 32-bit MCU market is growing is because of rising demand from OEMs for higher levels of precision in embedded systems and the need to connect sensors along with nearly everything else to the Internet of Things, according to researcher IC Insights. Many new 32-bit MCU designs support wireless connections and Internet protocol (IP) communications. More 32-bit microcontrollers are being used in a wide range of consumer and industrial equipment applications as IC suppliers introduce powerful MCU designs that cost nearly the same as 8-bit and 16-bit devices in consumer electronics and other high-volume systems, the researcher said.

More 32-bit processors for cars
Automotive, which is the single biggest segment for 32-bit MCUs, will continue to drive MCU demand for years. Feldhan said in 2020, automakers and automotive system manufacturers bought 2.3 billion MCUs of the 14 billion that were shipped to all industries worldwide. However, of the $9.8 billion MCU in sales revenue in 2020, automotive accounted for $4.8 billion of that total, according to Feldhan.

“It’s the lion share of the revenue but not the units,” he said.

Sales revenue and unit shipments of 32-bit MCUs will continue to rise over the next 5 to 10 years because of the electrification trend in the auto industry. Some automakers, including General Motors, have said they will phase out internal combustion engines in favor of electric vehicles. “With the new administration in the U.S., there’s momentum building pushing electrification of cars even faster,” he said.

That is good news for MCU manufacturers because electric vehicles use about 50 per cent more 32-bit microcontrollers than internal combustion engine vehicles according to Feldhan.