Growing use of IoT, especially in industrial applications, will result in greater component demand over the next five years.

Most electronics distributors can’t pinpoint how much Internet of Things (IoT) applications are impacting component sales but most believe IoT will become a more important driver as more consumer and commercial devices and factory automation equipment become IoT capable.

Much of the sales growth of components used in IoT applications will come from companies deploying IoT in factories because IoT analytics can identify potential problems in production equipment before they become more serious and cause line shutdowns.

IoT is also making inroads into the medical segment. During 2020, COVID-19 led to rapid growth in the development of new medical devices and systems, with the potential to fuel demand for improved connected medical equipment in the future, according to the survey. IoT is changing the way patients are diagnosed, treated and monitored and supporting vaccine tracking, inventory management and more. A quarter of survey participants expect healthcare to be the next big industry likely to take advantage of innovation in IoT connectivity.

As more IoT applications are created, it will help increase sales. “In general, most IoT applications require a broad range of standard components such as processors, power supply ICs and surrounding passives as well as discretes and connectors,” said Cliff Ortmeyer, global head of technical marketing for Newark. “I would say that the largest growth will include RF modules and devices as well as a broad array of sensing devices.”

A significant driver
Robbie Paul, director, IoT business development for Digi-Key Electronics, said IoT “has been a significant driver of Digi-Key’s business over the last three years, and that growth continues to accelerate. Digi-Key started to focus on IoT about five years ago but it took a bit for demand to kick in and take off,” he said.

Demand is growing. “Industrial applications lead the way, especially for Digi-Key, which is focused on the B2B markets,” said Paul. “The consumer segment has been most impacted by IoT and home automation products have gained in popularity,” he said. “Commercial IoT applications have been coming into their own in the last two years and have been given a boost with the COVID-19 pandemic and all the changes it has brought to the workplace.”

He said IoT has resulted in increased sales for sensors and ARM-based microcontrollers among other components.

Steve Brahosky, business development manager – connector/eMech business development manager for distributor TTI inc, said IoT is emerging as a driver for component sales. “If you look at factory automation, there’s a heck of a lot more sensing and connectivity happening in that space,” he said. All of TTI’s major suppliers have an IoT focus. In new product development efforts, suppliers are designing products that are geared toward IoT applications, said Brahosky.

“I’ll give you an example. In the ethernet world connectors are moving from the traditional RJ-45 connector to a single-pair ethernet connector which requires less size, less cabling, more functionality and higher speed,” he said. “So, there is an evolution of one specific product in an application that would be used heavily on industrial floor or in factory automation process control.” 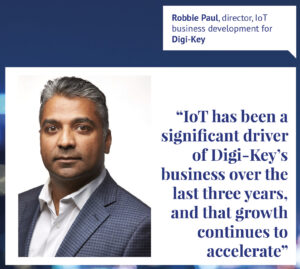 More opportunities coming
He said “IoT will help foster growth opportunities for us,” over the next several years, but “it is hard to identify what percentage of TTI’s business is going to be driven by IoT.”
Jeff Ray, vice president corporate product management & supplier marketing for TTI, said IoT will grow because it will enable detailed analytics of products or systems so factories can run more efficiently and preventative maintenance be conducted before a failure occurs.

“The ability to capture data, analyze it and make decisions or actions in real time in a cloud-based environment by which information can be shared real time allows predictive maintenance for robotics, vision systems, safety mechanisms” so a plant operates more efficiently,” said Brahosky.

There is a financial benefit to companies and then “the real momentum for IoT starts to take off because companies see the financial gain for their productivity,” said Ray.

Ray said because of IoT, TTI has added new suppliers and products for IoT applications. The distributor has added lines for Wi-Fi modules and sensors among others. Brahosky said with connectors, TTI’s “big three connector manufacturers “ all have sensing capability now,” because they acquired sensor companies recently. 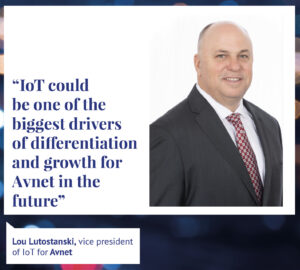 “IoT is about connecting devices, gaining insights, and driving business value and is on a path to go from being a “thing” to just the way things are going to be done as we move forward,” he said. Artificial intelligence is being used more in conjunction with IOT in products and systems.

“AI is impacting all industries,” he said. “We see it in the electronics space with customers implementing AI in microcontrollers to microprocessors to graphics processors for more complex AI model inferencing to drive intelligent video analytics and autonomous machines,” said Parikh. He added there will be more embedded cameras in the next several years and there are not enough people to watch feeds from these cameras to make decisions.

“AI models running on cameras for inferencing on the edge are going to be key to gaining business value from these cameras being deployed in applications, ranging from optical inspection to robotics to access control,” said Parikh. He said these systems will need to be connected and intelligent and connected to the Internet. “The AI models will require sensors, microprocessors, and microcontrollers ASICs and graphics processors computing, connectivity (cellular, BLE, Wi-Fi, LoRa), batteries and antennas,” he said.

He said in the not-so-distant future “all things will be connected and intelligent.”

Making a difference
Lou Lutostanski, vice president of IoT for Avnet, said the adoption of IoT in Avnet’s OEM account base has been sporadic. “The complexity and lack of standardization, which in turn prevents the formation of an ecosystem, has been the cause,” he said. However, IoT could be one of the “biggest drivers of differentiation and growth for Avnet in the future,” said Lutostanski.

He said OEMS need to take advantage of the cloud and IoT technologies to maintain growth and customer loyalty. “We believe that the work we are doing could facilitate the scalability and mainstreaming of IoT in the industry.”

Avnet has purchased multiple companies to add 700 software developers along with data scientists to help make IoT simple, fast, and secure for customers. The distributor has launched a global IoT program driven to help “customers bring their connected products to life.”

IoT will result in strong demand for a range of components, said Lutostanski. “Sensors will see the most explosive growth as sensor technology becomes more sophisticated and pervasive,” he said.

He added that IoT will “accelerate as a driver of growth in the future to the point where the percentage of IoT of our overall growth will be significant.”