Integrated circuit and discrete semiconductor revenue growth for distributors may top 25 per cent in 2021.

Distributors that specialize in semiconductors or derive a large percentage of their revenue from sales of integrated circuits and discretes are posting strong revenue growth in 2021 and some may post record chip revenue.

Demand for semiconductors is robust across a wide range of customer segments including industrial, wireless communications, consumer, computer, automotive, commercial, aerospace and defense. Strong demand has outpaced production capacity resulting in higher prices, which is contributing to revenue growth for distributors.

Distributors are seeing strong sales of microcontrollers, MOSFETs, power ICs, discretes and analog chips. World Semiconductor Trade Statistics says overall semiconductor revenue will rise 25 per cent in 2021 as sales reach $551 billion. Memory ICs will have the strongest growth areas as sales rise 36 per cent. Analog sales will increase 29 per cent; logic, 26 per cent; sensors, 24.8 per cent and discretes, 23.5 per cent, according to WSTS.

Many distributors are expecting strong chip sales for the rest of 2021 and into the first quarter of 2022. One specialist distributor that has posted strong sales this year is RFMW which specializes in RF and microwave semiconductors.

“RFMW has definitely seen major sales growth on all of our lines,” said Joel Levine, president and CEO of the distributor, He said demand and prices are rising especially on the RF/MW semiconductors needed for the telecom markets. “Demand is up, deliveries are long, and people are scrambling for devices,” said Levine. 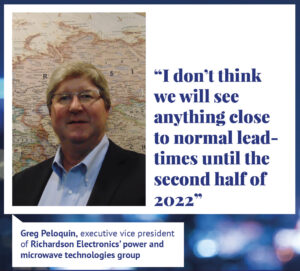 Strong demand, longer lead times
He said demand is up across all segments particularly for wireless telecom, aerospace and defense. “Commercial avionics customers are coming back finally as well as emerging applications for RF in the industrial space,” he said.

He said there are long lead time for many silicon- based semiconductors and delivery times are projected to continue into the middle of 2022. He noted that semiconductor manufacturers are adding capacity but “it probably won’t affect the near-term deliveries.”
It’s a different case with gallium arsenide (GaA) and gallium nitride (GaN) semiconductors. “We don’t see as much constrained supply for those segments except for package supply issues in some instances,” said Levine.

He said the slowdown in demand that occurred in March and April of last year was due to the pandemic, but sales came “roaring back with major bookings and shipments increasing and growing each quarter”
He said deliveries that were affected by COVID were primarily due to factories in Asia being closed from time to time with outbreaks. He added there are still some “delivery glitches” due to COVID-19 but the bigger problem is strong demand and limited available capacity in wafer fabs and in packaging because of some of the unique packages and materials used in RF/MW devices, Levine said.

Strong demand for RF, MW ICs
At Richardson Electronics, sales of RF and power ICs are growing 30-40 per cent so far this year, said Greg Peloquin, executive vice president of Richardson Electronics’ power and microwave technologies group. Richardson derives about 50 per cent of its revenue from semiconductors including RF, microwave and power semiconductors.
Last year when the pandemic slowed production of a number of electronics manufacturers Richardson’s chip business was healthy. “As I said to our team many times last year, demand for our products and capabilities did not go away with the pandemic.”

In 2021 business is better. “On the RF side, 5G infrastructure rollout has been expedited while satellite communications (Satcom) is exploding,” which is driving demand. He noted that the “go to market” strategies for businesses are changing because of the pandemic. He said there is growing demand for people to be able to “send and receive large amounts of data fast in remote locations.

EVs help drive chip sales
Peloquin added that electric vehicles, and battery chargers are also helping drive demand for power management chips. Healthy, if not stellar demand for semiconductors will likely continue until at least the first half of 2022.

Peloquin said there are shortages of semiconductors that Richardson carries but “we have been able to manage our power management and RF and wireless products from our franchised suppliers.” He added Richardson is working with its suppliers daily sharing forecasts to make sure “we are able to meet our current new customers’ needs.”

Rick Marano, president of Arrow Electronics’ Americas components business, agrees and said there are no indications that supply will loosen any time soon. He noted many chipmakers have announced they were increasing capacity. “This is true with the products that Arrow sells including embedded and connectivity products,” he said. However, “given the complex nature of the semiconductor manufacturing process, it will take time for these investments to come online,” said Marano.

The pandemic impacted Arrow’s business last year and “ we are still feeling the effects today.” The semiconductor supply chain is global and reliant on multiple industries and vendors who are geographically dispersed, Marano noted. “As the pandemic moved its way around the world and increased in severity, national and local governments dealt with the situation as they best saw fit,” he said. Shutdowns impacted nearly every portion of the supply chain. “This has a compounding effect, with the end result being significant delivery delays,” said Marano. 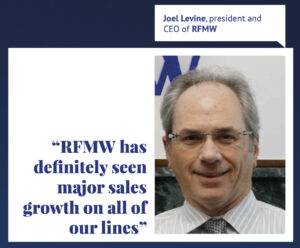 Demand evenly spread
It’s a different scenario this year. Demand is stronger and the increase is relatively evenly split across our various customer segments, primarily due to the fact that most manufacturing companies are seeking to bolster their supply chain,” he said However, it is hard to “point to any specific segment outperforming others,” said Marano.

“In the industrial segment we’re seeing a long tail customers in applications that you wouldn’t normally think of,” said Roybal. For example, in the dairy industry, companies need chips to help track livestock with IoT applications.

In the beer distribution industry, they are tracking uses and consumption of beer on taps.
“Produce is another interesting application as there is significant waste from spoilage in produce with significant percentage going bad before it gets to market,” said Roybal.

Using available technology, crop yields can be improved by farmers by carefully monitoring temperature and soil conditions and making necessary adjustments in watering and fertilizing crops, he said.

He said in the consumer segment, connectivity is driving demand. The fastest growing segment in consumer is gaming. “Not only are more people at home, but there’s more demand for immersive, virtual experiences in this ever-growing work-learn-play from home environment,” said Roybal.

Avnet is also seeing rising demand from the automotive supply chain. “Automotive is unique in that demand for electronic components from automotive prior to the coronavirus downturn,” he said. Demand continues to rise because of advanced driving systems and electric vehicles.
“Add to this trend the government regulatory requirements for more electric vehicles to be produced going forward and we can expect steady growth in this segment for years to come,” said Roybal.

Avnet is also seeing “a spike in demand that parallels the automotive industry from commercial aerospace due to major satellite constellation and ecosystem deployments,” said Roybal.