Electronics distributors are enlarging distribution facilities or building new ones to attract new customers and better serve existing ones.

Many electronics distributors are adding warehouse space, investing in automation equipment and enhancing their website capabilities to make it easier for buyers and engineers to find and purchase components. While there are allocations or long lead times for a wide range of semiconductors, passives and connectors, distributors say shortages won’t last forever. The extra warehouse capacity will be needed as more electronics is used in more products.

Many distributors are expanding existing warehouse facilities and equipping facilities with a range of equipment designed to maximize existing space and improve efficiency. Some are using vertical carousels for parts stored vertically rather than horizontal. Others are using cube storage automation which use robots to retrieve components. Some distributors have built new distribution centers. For instance, Newark, an Avnet company, has a new distribution center in Leeds, England. “The facility will enable us to hold more inventory, offer date-and-lot capabilities and 2D bar code labelling as well as improved shipping for our customers,” said Chris Breslin, president of Newark.

One distributor that has invested in warehouse expansion is TTI. “Some of our most recent investments have included an expansion of our Americas distribution center,” said Don Akery, president, TTI Americas. “We added an additional 165,000 square feet, bringing the operating square footage to 1 million,” he said.

The distributor has also invested in a new technology called iPack, which is an automated carton packaging system that minimizes freight, operating, and consumables costs of parcel shipments by rightsizing the pack and optimizing productivity.
“In addition to lowering freight costs and reducing the carbon footprint of shipping, rightsizing each parcel eliminates the need for void fill and additional packaging materials,” said Akery. 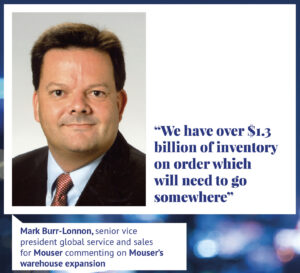 Investing in robots
TTI has also invested in AutoStore Robotic Solution, an automated storage and retrieval system (ASRS) that uses warehouse robots. “This allows 24/7 order fulfillment within a cubic layout so dense that it will quadruple storage capacity and unlock the true potential of storage floor space,” he said.

Such investment is needed to support TTI’s growing customer base. “We have increased our customer base an average of 10 per cent annually over the last five years. In addition, the need to increase warehousing space is also driven by the increased volumes and breadth of products/ technologies that TTI’s sells to existing customers, he said. Akery added a key part of TTI’s growth strategy is to sell “all of our technologies to every customer.” Two of the fastest growing technologies are discrete semiconductors and circuit protection.

Akery said as a specialty distributor, TTI carries the broadest and deepest inventory of its supplier partners. “Our line card is also designed to support our target customer segments. We have made strategic additions to the line card to grow our strength in industrial, military, commercial aerospace and transportation/automotive market segments,” he said.

TTI is also investing in its website and digital tools.

A focus for TTI over the past 18 months has been in its Application Program Interface (API) solutions for customers. “We are connecting directly with our customers’ computer systems, machine-to-machine, sharing critical information real-time,” said Akery. Such information about part descriptions, lead times, current inventory levels and pricing are available through the APIs 24/7 which makes the customers’ job easier, according to Akery.

High-service distributor Mouser Electronics has invested about $25 million over the last 18 months in warehouse automation, including AutoStore and i-Pack machines, which measures the height of the products and reduces the size of the box the parts will be shipped in. The automated systems result in more efficient operations and allow products to be retrieved and shipped to customers quicker, said Mark Burr-Lonnon, senior vice president global service and sales for Mouser.

More warehouse space needed
The company also increased its warehouse space by about 200,000 square feet over the past two years. Mouser has made the investments because demand for components has increased and it has added new suppliers, products and customers.
Because of shortages, Mouser’s inventory has declined from about $850 million to $760 billion, says Burr-Lonnon. However, “we have over $1.3 billion of inventory on order which will need to go somewhere,” he said. The extra capacity will eventually be needed although many parts have 20-,30- or 50-plus week lead times, said Burr-Lonnon.

“That is part of the value we provide,” he said. Mouser has also taken steps to make sure that a volume customer does not buy all of the inventory of a part. “In this market we have actually had to invest in not selling stuff. We need to preserve inventory so it will be available for 100 engineers instead of the parts going to one guy,” he said.

Another key investment has been to improve Mouser’s website search capability to make it easier for engineers to find parts. “We have changed our search technology,” said Shumate. “We are adding several key technologies including signals, machine learning and artificial intelligence. Our search engine for products now knows everything that everyone has looked for on our website and on some other websites, what they put in their carts and what they purchased,” said Shumate. 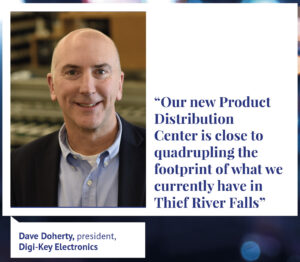 Making strategic investments
High-service distributor Digi-Key has also made strategic investments to “expand warehouse capacity, localize customer experience both digitally and from a support standpoint, scale our website and web services and expand into new markets,” said Dave Doherty, president of the distributor. Doherty said the biggest capital investment Digi-Key has made in recent years is in warehouse infrastructure. Its new Product Distribution Center is close to quadrupling the footprint of what the distributor has. “It’ll give us 2.2 million square feet and allow us to serve close to three times the number of packages that we support today, out of a single site location,” said Doherty.

Digi-Key is also investing in its operations around the globe, and in particular, India which is a growing market for the distributor. “We are in the process of creating a local entity in India, which will allow us to do business more locally there, supporting the Rupee as a currency and providing more localized customer support,” said Doherty.

He said the distributor hopes to open a customer service center there in order to support the growing number of engineers and OEM technology companies that are emerging in India.