Chipmakers are adding production capacity and demand is expected to weaken which will lead to improved supply conditions for semiconductor purchasers.

Electronics purchasers in the auto industry can expect shortages of microcontrollers, MOSFETs and a range of other chips used in automotive systems to continue until the second half of next year and maybe longer.

While integrated device manufacturers (IDMs) and foundries are adding semiconductor production capacity, much but not all of the investment is for chips produced on leading-edge technology nodes, such as 5nm, 7nm and 10nm and on 12-inch wafers.

With a few exceptions, chips produced on such process technology nodes are not used in automotive systems, but in servers, PCs, laptops and smart phones. Most semiconductors produced for use in vehicles are often built on 8-inch wafers using more mature process technology nodes such as, 130, 110, 90 and 65 and 28nm. There are some chips used in automobiles that are built on 5nm nodes.

Most buyers, suppliers and analysts say current shortages impacting the auto industry and all other electronics industry segments is the worst they’ve ever seen. There are many allocations and lead times are long for most semiconductors. Component shortages have resulted in automakers temporarily stopping production of vehicles.

For instance, Toyota said it would produce 60,000-80,000 fewer vehicles in October in North America because of component shortages and ongoing challenges in its supply chain. Ford announced it cut back production of its popular F-150 pickup in September because of a lack of chips. Nissan said it plans to make fewer vehicles in 2021 as it did in 2020 because of the semiconductor shortage.

Unprecedented shortages
“We’ve never seen anything like this before,” said Dave Valletta, executive vice president of global sales and marketing for Vishay Intertechnology, which supplies MOSFETs and other components to the auto industry. “We’ve had times of shortages in the automotive industry before, but never like this.”

Many of Vishay’s MOSFETs are on allocation. “In some cases, we’re forecasting out to the end of 2022 and into 2023,” said Valletta. “It is really severe. We are adding capacity as quickly as we can but it takes time,” he said.

Next year Vishay will have a double-digit increase in capacity, Valletta said. But “it’s nowhere near enough to cover demand,” he said.

Vishay makes MOSFETs internally but also outsources some production to foundries. The company is trying to outsource more to foundries but “we are running into the same problem as everyone: foundries are completely booked.”

Vishay also supplies diodes and optoelectronics to the auto industry. Diode supply is tight but it is not “quite as restricted as MOSFETs,” said Valletta. “Diode supply is more manageable. Optoelectronics are in pretty good shape in terms of support for automotive programs,” he said

Guarav Gupta, vice president analyst at researcher Gartner Inc., said microcontrollers, power management ICs, discretes, analog ICs, MOSFETs and display drivers used by the auto industry were in short supply at the beginning of the fourth quarter. The shortages will not end anytime soon,” he said.

“Our prediction right now is we will see a better balance of demand and supply in the second half of 2022. When I say there will be a better balance, it probably won’t be true for all devices or all applications or all industry verticals,” said Gupta. “But overall, you will see a much better environment” for semiconductor supply, he said.

More capacity coming
He said there are several reasons why supply will improve for semiconductor buyers next year. One is the addition of more chip capacity. Foundries and integrated device manufacturers have invested in increasing production capacity.

TSMC, UMC, Vanguard SMIC, Bosch and Infineon, which make semiconductors for the auto industry, have new fabs coming online. “Some of that capacity will come online by the end of this year or early next year but most of it will start coming online towards the end of 2022,” he said.

“For the full year, we expect to increase output for MCUs by close to 60 per cent over the 2020 level which also represents about a 30 per cent increase over the 2018 pre-pandemic level,” he said. As a result, he expects that the automotive component shortage will be reduced for TSMC customers starting this quarter.” Overall TSMC’s capital spending this year will be $30 billion, a 74 per cent increase from 2020.

Other semiconductor companies are also building new fabs, and increasing capital spending. For instance, Infineon’s capital expenditures this year will increase 59 per cent, according to IC Insights.

Infineon has just opened a new $1.86 billion 300mm fab in Austria that will build power semiconductors for the industry in other segments.

The fab, which had been under construction for the past three years, began producing chips in September, the company said. At first chips produced at the fab will primarily be used to meet demand from the automotive industry, data centers and renewable energy generation of solar and wind power. The fab will enable Infineon to serve the growing market for power semiconductors by those business segments. Bosch has begun production of a new 300mm fab in Dresden Germany which will also produce chips for the auto industry and other industries. 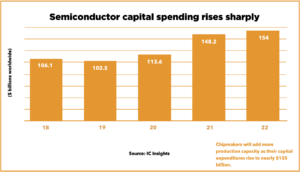 Chip demand to weaken
Another reason that supply conditions will improve is semiconductor demand is weakening in certain segments such as consumer electronics, according to Gupta. “Softness in demand will also help ease the chip shortage,” he said.

Shortages may also ease because some foundries are looking for long-term, non-cancelable orders because of panic buying from some buyers who are double and triple ordering parts, according to Gupta. TSMC chairman Mark Liu recently said his company was trying to figure out which companies really needed chips and which ones were hoarding. The foundry was delaying orders to customers that may be stockpiling semiconductors.

“Because of higher coal prices, China has decided they want to enact new policies to reduce energy consumption,” said Turner. They are doing power outages and not prioritizing manufacturing,” she said. As a result, production of assembly and test materials needed for semiconductors is slow, further exacerbating tight supply.

In the longer term, while chipmakers are adding capacity, it may not be enough because demand for chips is expected to grow robustly in the auto industry and other segments.

In addition, more vehicles will be equipped with driver assistance systems features such as lane change warning, automatic braking in an emergency and collision avoidance. Such systems are mainly used in higher-end vehicles but will migrate to lower-cost vehicles over the next five years. Driver assistance systems require a wide range of semiconductors and will further boost chip demand.