Prices for MOSFETS, IGBTs and rectifiers increased in 2021 and there could be more price hikes in 2022.

Buyers can expect continued tight supply for discrete semiconductors through most of 2022 but supply could loosen towards the end of the year and lead times for some discretes could shrink a bit.

However, lead times will still remain long with some chip manufacturers saying that MOSFETs, rectifiers and transient voltage suppressors (TVS) will have lead times of 52 weeks for most of the year but rectifiers and TVS parts could fall to the 30- to 40- week range later in the year.

Lead times will remain long although demand for discretes won’t be as strong as it was last year. Unit shipments of discretes are expected to grow 6 per cent in 2022 compared to 23 per cent in 2021, according to researcher IC Insights. Discretes sales revenue will rise 5 per cent to $36.1 billion in 2022. In 2021, sales revenue grew 27 per cent.

“It was a good growth year for discretes in 2021,” said Rob Lineback, senior market research analyst for IC Insights. Chipmakers that make discretes including ABB, onsemi, STMicroelectronics, Nexperia and Vishay had strong sales.

“In fact, it was a record year,” said Lineback. This year, however, the discretes market will “settle back into a little more normal growth,” he said. For instance, power transistors revenue will have the highest growth rate of 6 per cent and growth of other discretes will range from 3-5 per cent, according to IC Insights.

“We increased prices three times in 2021, 5 to 10 per cent each time. We just completed another increase in early 2022,” he said. There could be more price increases later in 2022.

Valletta said discretes prices are rising because Vishay and other chipmakers had increased materials and logistics costs. “The cost of wafers, other materials and logistics are through the roof,” he said. Despite the price increases, Vishay’s profit margins are under pressure although “we are shipping more than ever,” said Valletta.

He said Vishay is “trying to keep our heads above water” from a profit point of view. “We are struggling on that. It is a challenge. It’s not just Vishay, it’s the whole industry,” according to Valletta.
He added customers have been “fairly understanding” about the price hikes. “They see what’s going on.” When materials and logistics costs decline, prices will decline, too, Valletta said.

Prices could also decline and lead times could shrink if demand lessens later in the year and more discretes capacity comes online. Lineback noted that in 2021 there were shortages of power discretes, transistors and some other discretes and “that is still somewhat the case but it is now relaxing a bit.” 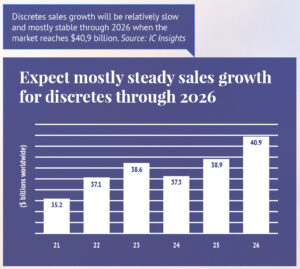 Discrete capex lags
He noted there have been some increases in discrete capacity capital spending, but discretes investment has lagged behind leading-edge ICs. There’s more caution among discretes manufacturers concerning investment in new capacity. “They kind of know discretes will eventually swing back to be a glut market,” he said.

“It’s a big problem for the industry. All the attention is focused on new expensive fabs,” said Lineback. Why don’t we see equipment makers going ahead and building new equipment for 200mm and 150mm wafers? They focus on the leading edge,” he said.

In some cases, chipmakers are building new fabs for production of some discretes. For instance, Vishay is building a 300mm fab in Germany that will make MOSFETs for the auto industry. The fab will go online in 2024.

Extra capacity will likely be needed by the auto industry because of the growth of advanced driver assistance systems (ADAS) and rising production of electric vehicles which need more discretes than internal combustion engine vehicles.

“Automotive is a big segment for discretes,” and for other semiconductors as well, said Lineback.

“There’s a tremendous amount of semiconductors—including discretes—that are going into midrange, mainstream cars,” he said. ADAS systems and EVs need to be power efficient and that requires more discretes, he said.

Advanced automotive systems that have safety systems, infotainment, navigation, and fuel efficiency security, will be drivers for discretes for years. 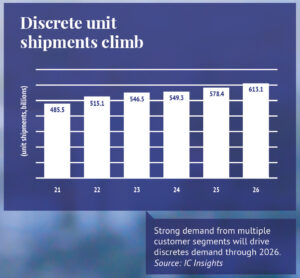 EVs will drive IGBTs
Electric vehicles use power transistors, power diodes and insulated gate bipolar transistors (IGBTs). IGBTs are integral components in the EV power electronics systems and demand will rise over the next several years as the amount of EVs built increases. About 6.6 million EVs were built in 2021 and accounted for 9 per cent of global car sales, according to the International Energy Agency (IEA). The number is expected to grow as more carmakers say they plan to build more EVs.

An IGBT is used as a switch in an EV inverter. It is connected to the traction motor and takes DC from the car’s battery and, through the inverter, converts AC control signals to the high power needed to operate the motor.

Semiconductor buyers at automotive companies can expect to see more silicon carbide discretes over the next several years.

While ADAS and electric vehicle technologies have ramped up demand for IGBTs and other chips, other customer segments will also help drive discretes over the next several years.

Computers and industrial applications have helped drive discretes demand in the past, and new applications from those segments will further drive demand over the next several years.

Valletta is bullish about the overall discretes business in 2022 and beyond although some analysts have said that there was inventory building of discretes in 2021 by OEMs, electronics manufacturing services (EMS) providers and distributors. As a result, some analysts say there will be less purchasing of discretes in 2022 than 2021 because of higher inventory levels at OEMs and EMS providers.

However, Valletta isn’t so sure. Vishay does not see any signs of the slowdown. “We track inventory building in distribution and we do not see any meaningful signs of it,” said Valletta. “We speculate that inventories may be building at customer shelves, but they insist they are not putting stock on the shelf,” he said.

Valletta added that 2021 was probably the best year ever for discretes sales. “If I look at past cycles for discretes, 2010 was incredible, 2018 was a record year, but 2021 was our best year,” he said. He added that discretes demand from 2021 carried over into 2022. In fact, in early March orders were rising, according to Valletta.